Difference between revisions of "DACS"

A system used by BT circa late 1980's - 2000+ to provide a telephone service to a premise where there was no spare copper pair available. Copper had become a costly resource and laying new cables to new or remote locations could be very expensive.

DACS allows for 2 digital telephone signals to be carried over the same copper pair in the local loop. It was used on exchanges which ran System X and System Y equipment and allowed each telephone line to run independently, unlike the previous 'party lines' where conversations could be overheard and only one subscriber could use the line at any one time.

DACS 2 was officially released in the mid 1990's when DACS 1 systems were upgraded as they supported higher data speeds. References to DACS usually implies a DACS 2 system.

DACS works by converting the telephone analogue signals into digital signals and allowing 2 digital signals to be carried over the same copper pair from the exchange to the local pole or in the home. 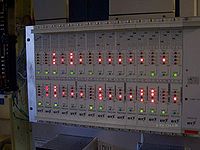 At the exchange end normal analogue telephone lines are connected to the DACS unit. The DACS EU then takes any analogue signals from these lines, converts them to a single 128kb digital format and then is able to simultaneously digitally pass information from 2 lines over one copper pair in the local loop.

To the right is a photograph of an ECI rack which has 15 line cards. Each card on the rack contains 2 digital trunks for 4 telephone lines, therefore supporting a total of up to 60 subscriber phone lines.

As well as the line cards, both units have synchronisation, maintenance and alarm monitoring systems.

Commonly used when there was a shortage of available copper pairs in a particular area and for converting lines in to neighbouring properties. The boxes are black or dark grey and usually located at the top the nearest telephone pole or may be attached to an external wall of the properties. A similar external unit is also provided for underground which has a re-enforced plastic case.

Commonly used when a second phone line into a property was requested.

ADSL is incompatible with DACS and will not work on a DACS line. During the period 2002 onwards there were many users who found they were unable to get adsl due to them being on a DACS line. Unfortunately for some, there was no alternative but to wait until BT de-DACS their line or a spare pair became available. Each case is reviewed depending upon the cost to provision new cables to the area, at the time of writing BT's policy is believed to be up to £20,000 per deDACS.